Cancer for Cocaine! I say that it would make for a lovely exchange. Somebody call the Rotary Office! 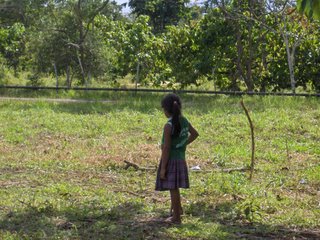 I’m in the Amazon. In a place called las joyas de sachas. It should be a pretty town, but it is the text book definition of an ecological and human disaster. The girl here is in a "soccer pitch" and that dark horizontal line is indeed the petrol vein. This is the place that Texaco came tearing into, and pulled out as much crude oil as possible with very little given to environmental and human health. The public outcry of Texaco’s handicraft forced them to change their name to Chevron. You know, a new name means a new history, no?

Despite Texaco / Chevron rubbing the slate clean, the after effects of their work in the Amazon is still devastating, as all the new petroleum developers continue to follow a few basic rules: pay nothing to environmental sustainability, pay very little to the Ecuadorian government (only $4 - $7 of every barrel of oil pulled out of Ecuador, actually stays in Ecuador), and pay the workers next too nothing.

Oil workers in sachas get paid about $120 a month, when the work is good. If it is slow, or there is maintenance to be done on the pipeline, that number goes down…a lot. The rates of cancer, according to some local doctors, are skyrocketing! Cancer is just about ready to takeover as the number one killer in sachas. That’s a pretty impressive accomplishment, to have a first world disease compete among diseases of the poor for the champion of morbidity. I can see the mayor now, broadcasting to all how 25 oil workers died from cancer, while only 14 pregnant mothers died on the road to the hospital to give birth (this is quite a common occurrence, as despite the abundance of Texas tea, locals can hardly afford anything, let alone a working vehicle with petrol in it).

So now, I’m curious. About 6,000km to the north and a little to the west is Alberta. Canada’s very own American State. In June I was passing through the town of Whitecourt, another oil town. Whitecourt is struggling, in its own way, as it can’t build enough houses or schools to accommodate the growing population that is seeking fortune on the oil fields. Car dealers can’t keep up with the demand for hummers, and the guy selling big screen TV’s is struggling to keep inventory in his store for more than a day.

At the local Boston Pizza, the young oil workers, almost all high school drop-outs who abhor any idea of higher education as salaries of $100,000 for a guy without grade 12 math is pretty hard to turn down, are doing lines of cocaine in the bathroom. They just can’t spend their money fast enough, so it goes up their nose. Without their grade 12, and the mentality of a spoiled kid in the candy store, they spend and spend.

What I can’t figure out is why my pals in Whitecourt, who don’t have enough math skills to do their own taxes, have the right to furiously spend money as if it were on fire. And in the light of the bonfire comes the chatter of how Alberta needs private healthcare, more private schools, and won’t give one cent from the oil boom to other provinces who are struggling with public debt.

Meanwhile in the broiling Amazon, oil workers only have the right to work, get paid next to nothing and die from being poisoned. Oil is oil. Be it from Alberta or Ecuador. The world market says there is no difference between oil pulled out of ground by a group of guys who get paid $100,000 a year compared to another group of guys who do the very same job, and sell the proceeds to the very same market, for about $1400 a year.

Halliburton and friends should have an annual worker exchange program! The boys from Alberta should come down to the Amazon and get cancer, and the Ecuadorians should enjoy a month in Whitecourt complete with nightly visits to Boston Pizza’s bathroom.

In many ways Alberta is the whitewash of oil. It justifies the extraction, because life is good for those who do it. But, the grim reality is that most of the world’s oil is pulled out of the ground by the desperate of the earth, who either have to suffer through bad health or brutal violence, and in the case of Iraq…both! If the entire world’s oil was pulled out of the ground with same lifestyle and mentality as it is in Alberta, we would be paying a solid $20 a gallon for fuel. No questions there.

But most of the world’s population enjoys bargain prices on oil, and complain about the imposed taxes that get thrown in there. It’s the brutality of labour conditions coupled with trade policies that ensure that next to no money remains in the communities of oil workers; money that could be put into safety equipment, transportation systems and basic social services that could do something about the monthly occurrence of a dead-would-be-mother lying in the ditch 20km from the nearest hospital. Spikes in energy prices might occur from time to time when speculators smell war, or hurricanes, but the baseline price, is based on places like sachas. Places torn open and left to rot, with absolutely no capacity to take care of those in need.

It’s the same philosophy that lies in Whitecourt, only seen through the fun-house mirror that is the global economy.


Comments:
HAHA...if you don't know...don't write...i mean i know its a blog...but i grew up in whitecourt...and i have no idea what boys you have neen talking to...but if you want to be something other than a shop rat or a swapper or suck shit out of a hole for a living...you need a high school education...which the majority of my guy friends have....and the truth is...most of the "out of towners" the boys from the east coast are the ones that come to whitecourt to make it big and spend all there money on the Ralph machines (slot machine) as we call them.....so don't make whitecourt sound like a hole...cause its not....its full of hard workers....and no matter where you go...you will find scum that put coke up their noses....!!!

I have seen your page and I see it interesting.
10/325 - Vicoprofen - Lortab- Tylenol #3- - Ativan
All Major Medications are available right here at:

Polls
Smack a racist outside your local primary school t...
Brash on those Maoris, IV
Bottoms Up
Faumuina continued
Sione Faumuina Just Posted on a Warriors Forum?????
Hey, I actually agree with Rodney Hide!
Dumb
Pigs in Space (tracking the advance of the police ...
Whatever you hate, I AM IT