The great world traveller, having abandoned his blog-writing duties for some weeks, offers the following assessment of Winnipeg, Canada: a bit grim. A fine place for a brief touristic visit in summer I'm certain, but by mid-October it is too cold for kiwi blood. Minus 5 to minus 7, with a windchill on top of that. Feels like minus 11 so they say. Encountered snow squalls north of the city too (dark, low clouds that look like they could form tornadoes if only in was summer). All the leaves have already gone from the trees (contrast Vancouver where many trees haven't even turned yellow yet -- yes, the deciduous ones!). Now I could handle this kind of thing in December ... a Canadian winter is not to be trifled with. But I can't handle summers being so abruptly and violently cut short.

The place also features poorly maintained concrete roads, and an unrelenting flatness. Not much in the way of nature to observe then, except for some Canada geese which were pushing their luck in terms of delaying a flight south. In sum, my return to the mild coastal environment of BC in "fall" (although, as noted above, leaves are barely falling here) was welcome after 3 days on the prairie. 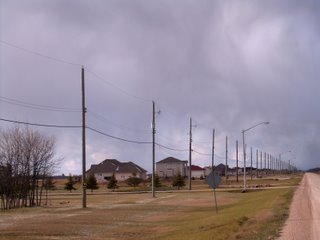 On the plus side you could pick up one of these big places outside the city, with - ahem, unlimited prairie views - for a steal. Trade in your modest Auckland bungalow for one of these monsters!

Comments:
Winnipeg is that text-book definition place where 1st prize winning vacation is a five day period, and 2nd prize is a full week.

For a place who's unnoficial provincial bird is the mosquito and who's local pass time is unemployment and car theft, I have trouble relating to those small groups of Winnipegers pining over their deep blue collar cigarettes and cheap beer, saying "Oh Randy Bachman, where are you now when we need you the most?"
Besides the obvious, the new legal issues doesn't help with the upselling. Right now, doctors in Manitoba are lobbying for the right to refuse treatment on patients, if they so desire. I'm murky on these details, but still, it doesn't bode well.

Yet, housing is certainly cheap. But then again, so are camp ground admissions.


A Canadian friend from some small town in Alberta who was telling me about the weather there once. I made a mental note to stick to BC, Toronto, and Montreal if I ever head up to Canada, and never ever to go to Alberta.

I don't mind temperate climates, but Alberta sounded like hell on earth.

Dinkas - summer in Alberta can be exceptional (as it can be throughout the prairies). It's all a case of timing. I recommend Dinosaur Provincial Park in July.

sues aside, Alberta is generally a silly place to be. A lot of high school drop outs making over $100,000 working on the most filthy and unproductive patch of oil in the hemisphere. Couple that with a culture that abhors public education, laughs and public healthcare, and boasts the strongest geneological link to the United States than any other place on earth.

It's the text book definition of the 51st state in the making.

DC: But to the lefthand side of the page, I have spotted the lovely "Lee Hyo-ri" and that random Korean girl in a bikini. I imagine Korea will get a bit of a work over before me thinks about Canada.

Mate, there's plenty more where they came from.

I'd rate Korea a close second to eastern europe for sheer quantity of beautiful women.

Dinkas: I could post a picture of a hot Canadian girl if you'd like. In the interests of balance and all that.

The Atomic thorn in the Nuclear Lion's Paw
Presenting Dork John Hayes
Speaking of Helen Clark and Corruption
I'm an edgy square kid!!!!
Getting bums on seats at the rugger? Why lets jus...
Petrol Prices
New Use for my Decking Timber
From Our WHAT THE FUCK Files
Sportsfreak
NRL Grand Final 2006