And so it goes on

NZ cricket continues to shit all over itself.

And now it allows him to get away with picking a completely and utterly fucking useless third nipple bowler by the name of Jeetan Patel.

Now lets look at this with a degree of seriousness.

Most teams in the history of cricket will choose 4 bowlers. But no, not us. We want to pick 5 bowlers. And this after it's plainly obvious we have fuck all batsmen.

Vettori is picking an off spinner who will get fuck all overs (unless the pitch offers something in which case he will choose to bowl himself, despite the fact that he turns the ball less than Ron Jeremy when he's representing the Missionaries).

But sadly, I haven't even reached the utter joke yet.

We have actually picked Sinclair AGAIN.

This is a miserable git who has been dropped from the NZ team once before.

Whoops, sorry, made a mistake there. He made some runs in domestic cricket and was reselected before being dropped again for a second time.

Oh fuck, that's right, he got a few runs in domestic cricket, the State Shield or whatever it was and was called in again. And was soon after dropped again for the third time.

Ummm, hang on, it's a bit fuzzy but errr, yeah, I remember now, he was called back in again because of his domestic form and fuck me days, scored piss all and was dropped again.

Yes, it's true, he made more runs domestically and was recalled again....

and the result was.... footwork similar to somebody in a bobsled and once again he was....

a) dropped,
b) not required to play again,
c) declared fucking hopeless...

and now NZ cricket has decided to give him another chance (yes a 6th - at the time of writing this is world record for any sport that I care about).

The sad ass bitches won't pick Kane Williamson because he might get his feelings hurt by the mean Australian bowlers. You know, those future legends of the game, Johnson, Bollinger, Harris and Hauritz. The same guys that couldn't get Darryl Tuffey out in the second innings.

Williamson would have to face them, not Lillee, not Thomson, not Garner, not Marshall.

He isn't on tour in the Caribbean or at the WACA.

It's a one off test in Hamilton.

All you have to say to him is "look, these guys are good bowlers, you are 19 and might struggle a bit but if you fail you can go away and work on any areas they exploit and come back a better player".

But no, we are going to pick Patel to smash them all over the park.

Tigers v Eels
Tigers by 2
Bit of a head cold here so hope these make sense. It's a bloody lottery anyway. This should be a real beaut to watch if you dislike defence and love beautiful footwork, passing and attacking. I ummed and ahhhhed for several seconds, maybe even like 20 or 30 which must be a record before deciding on the Tigers to have more motivation after a pathetic defensive effort last week.

Dragons v Cowboys
Dragons by 14
The Dragons are hot as hell right now and on home turf v a side that is a bit scratchy at the best of times and away from home they should have no chance.

Panthers v Storm
Storm by 6
The Storm have been absolutely shit with the ball in week 1 and 2 and will need to find a few points because the Panthers at home generally score some. But their defence saved their sorry asses last week and might do enough for them again.

Sea Eagles v Knights
Sea Eagles by 8
The Knights don't look like they'll roll over for anybody at the moment but the Sea Eagles are 0 for 2 and have their first game at home + Des Hasler is ripping dressing room doors off their hinges after 2 losses so I wouldn't want to see what he does after 3.

Titans v Raiders
Titans by 8
Neither team does it for me. The Titans might be 2 and 0 but they are seriously not that flash. Home against the Raiders though this should be a perfect 3 and 0 start.

Broncos v Warriors
Broncos by 14
The Warriors are about to get touched up. They were quite impressive last week but against a Broncos team with a point to prove they are going to get carved up.

Bulldogs v Roosters
Roosters by 6
This is a tight one to tip. The Dogs aren't in good knick at the moment but they've played two hot teams. Unfortunately they are about to play a third.

Sharks v Rabbitohs
Sharks by 2
The Sharks are tantalisingly close to breaking their losing streak. If they aren't going to break it at home v the Bunnies then they may as well go play in the Jersey Flegg for a year.

A 5 from 8 effort in week 1 which I'll take given the surprising upsets. Onwards and upwards in week 2.

Dragons v Bulldogs
Dragons by 8
I think the Dragons will carry on the form of last week, and so will the Bulldogs (or lack of). And how much are the Dogs going to miss El Masri?

Rabbitohs v Titans
Rabbitohs by 6
The Rabbitohs have to make amends for a god damn awful performance last week. The Titans were lucky to get away with a win and may just struggle a bit to get away with that sort of performance two weeks in a row. I'll call it now, the winner makes the playoffs, the loser doesn't.

Warriors v Sharks
Warriors by 6
The Sharks look a much better side than last year and a win to them wouldn't shock me but the Warriors should win most of their home games and a bit of passion this week will carry them over the line. If they lose this will be one damn long season.

Knights v Storm
Knights by 4
I'm tipping a big upset here. The Storm just did enough last week on the road but I the Knights look to have a better attack than the Storm faced at Shark Park and the home crowd might lift the Knights over the line.

Cowboys v Panthers
Cowboys by 4
They came home with a wet sail against the Broncos and should have too much class in their own joint. The Panthers will be tricky to beat, but not as tricky away from home.

Eels v Sea Eagles
Eels by 4
The Sea Eagles suffered a devastating blow losing weasel face for most of the year and remember how shit they were last year when he was sidelined. I think this game will be tight as hell, but the Sea Eagles confidence should be down and the Eels can't start the year with back to back home losses. Can they? but, but, they were being talked up as favourites! In their dreams they are.

Roosters v Tigers
Roosters by 6
This game should be a doozy. The Roosters were surprisingly impressive against the Bunnies (who played poorly) while the Tigers went through the motions until they sparked late to steal a win. The Roosters will run from the front and hold them off.

Raiders v Broncos
Raiders by 6
The Raiders are usually a bitch to beat at home and the Broncos who will probably roll hot and cold all year might be cold on monday night.

I might be intoxicated but this is where it all happens, stacks on the mill and all that shit. Not even Warren Ryan and Phil Gould can wreck the NRL, though they do their best.

Sportsfreak is where you can see the competition but those two just make up the numbers (famous last words).

Broncos vs Cowboys
Broncos by 8
“The Broncos came home with a wet sail once Henjak taught them how to concede fewer points than they scored. Maybe they'll keep that going.”

Eels vs Dragons
Eels by 4
Should be a great game to start the year. The Eels may still be depressed after last year's finale but they showed themselves what they were capable of when in the mood. The Dragons will want to make a statement but it's a bit early for them.

Saturday 13th March
Bulldogs vs Knights
Bulldogs by 12
The Knights will need permission for half their team to be allowed out of prison for the day. They've got no chance.”

Panthers vs Raiders
Panthers by 10
No idea how these teams will go this year so I'll go with the home side.

Sunday 14th March
Titans vs Warriors
Titans by 8
We might get a glimpse of how much influence Tony Iro has had on the side early and by God I hope it's a big influence, but away in the heat to a decent side is too much in round 1. I do have a funny feeling though that the Titans might slide backwards this year.

Rabbitohs vs Roosters
Rabbitohs by 10
The Rabbits should do this easy. Their forward pack looks beasty, just a matter of seeing if the backs can back them up.

Monday 15th March
Tigers vs Sea Eagles
Tigers by 6
Hopefully Marshall carries on with the more mature and (relatively) injury free football that he played last year and the Tigers set the Sea Eagles off on another 0-4 start to the season.

The essence of the story, you'll see, is that an eight-year-old girl (let's call her Aiko) claims to have been bullied at an upper-class school, which she is now hesitant to attend. A fairly run-of-the-mill situation, but one that is also unacceptable, and needs to be addressed by school authorities, and possibly parents and other government authorities where necessary.

As one pursues the story further, it is suggested that the "bullying" may be little more than a school "allow[ing] students to run, yell in class and tussle on the playground", or perhaps even that Aiko "was scared after two boys nearly collided with her by accident as they rushed down the hallway to get lunch."

And it happened in Japan.

Not, you'd suspect, something that needs to be picked up by the NYT half a world away.

But because the eight-year-old in question is "Her Highness Princess Aiko" the rules are different. Why? Well, because, um, she's the daughter of a guy who will probably inherit "the Chrysanthemum Throne" from his father at some point. Not that Aiko herself can, of course, what with being female and all.

Objectively, she's no more nor less interesting than any other eight-year-old Japanese kid. She hasn't saved the whales, or rescued puppies from a burning petrol tanker. She appears to have done nothing remarkable, and neither has her father.

She's newsworthy because she happened to be born into an aristocratic family that used to wield political power, but are now figureheads. In other words, she's not newsworthy at all. She's a kid. Experiencing normal kid problems.

Closer to home, Will Wales-Windsor is a late-20s trainee helicopter pilot from London. If not for an accident of birth, he'd be paying for his own flights to New Zealand, carrying his possessions in his own backpack, and buying his own beers (not nicking John Key's).

The core problem with the monarchy is it makes otherwise normal, reasonably intelligent people turn into fawning idiots, who see the unremarkable offspring of aristocrats as some uniquely precious breed of human, who must be spared life's normal annoyances at all costs, and merit obsequious, scraping behaviour from all who meet them, even those with a democratic mandate to lead, and/or a personal history of actual achievements. 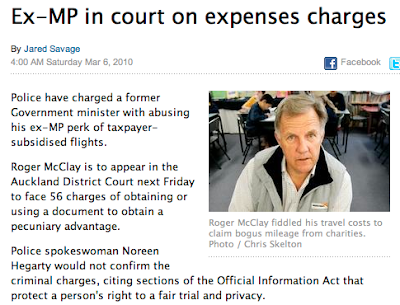 ...before he's even appeared in court to face the charges. Nice.

I wonder who ratted him out, though? Could it be the long, moderately dark hand of the former MP for Tauraunga?

This Aussie cricket team is so cool.

Where are the Tui billboards while these guys are here. They could have a field day.