New Zealand has had a vasectomy

Prime Minister John Key surprised the Press Gallery with an announcement today that he had ordered a vasectomy for the country, after concluding that its population was just too dumb to reproduce, having yet again voted his party into power. In the silence that followed, Mr Key elaborated, saying that the steady hand of Muzza McCully had "fixed the problem once and for all", sparing the nation's manhood the indignity of rough treatment at the hands of "Crusher Collins" or "that idiot woman from Rotorua who dresses like a caricature of a Westie." 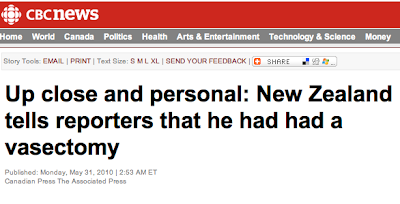 And the "talk is cheap" award goes to...
And you thought you were having a bad day
Speaky the Engrishy?
Sorry Boys
NRL - week 7
An ideal place for a U-turn
NRL Week 6
Best corporate renaming ... ever
Random Stats of the Year
I have an idea