Darth Watch: The horse has bolted!

If it's not the bloody Labour Party and political correctness bringing this country to its knees, it's ... [insert dramatic drum roll here to indicate suspense] ... DRUGS!

Well, the illegal ones, anyway.

Sure, the police and Customs do their damnedest to stem the flow of illegal substances into this country, but they're obviously fighting a losing battle, and the pot and the P and the coke and the horse still flow like a river.

Darth, "the coke" and "the horse" do not flow freely in New Zealand, by any stretch of the imagination. In that they are both relatively scarce and bloody expensive. Also, no one has called heroin "horse" since you were a pup reporter on the crime beat.

Darth excludes his favoured substance (tobacco) from the list of "murderous" substances because, umm, well, it's umm legal and umm therefore not immoral or umm something.

Nevermind that rational analysis of drug harm by people who actually know their shit (Nutt et al. in the Lancet (2007)) leads alcohol and tobacco to be ranked (considerably) more highly than many illegal recreational drugs, including cannabis (well d'uh), LSD, GHB and Ecstasy. And FYI, George, amphetamine ranks below alcohol but above tobacco in terms of harm.

Nevermind, George is earning his keep this week via a blunderbuss approach to, err, listing social problems.

If the problem is drugs one paragraph, it's violence against children the next, investor rip-offs after that, and race relations (courtesy of a well-known half-brown motherfucker) bringing up the rear.

At which point Garth actually makes an interesting and likely valid point: " his [Harawira's] latest outburst reveals is that there is among many Maori an abiding and malevolent antipathy towards Pakeha, which is far more widespread than we're prepared to acknowledge" - the counterpoint of which is "a corresponding bitter antagonism to Maori on the part of many Pakeha."

But just when you think Ole Smokey might be on to something, he finds he has nothing more to say, and pads out his remaining space with 127 - yes, count 'em, 127 - consecutive words taken verbatim from the King James Bible he always has to hand.

I hope Isaiah is being handsomely reimbursed for such extensive - and entirely irrelevant - borrowing. There's nothing like a trite Bible phrase or two to complete one's weekly literary offering to the nation, followed by a pithy summary from the moustachioed one himself: "Fat chance, but the offer is still open."

On a brighter note, doesn't Santa look awesome!?! Nothing like the 75-year-old alcoholic he previously resembled - he's now bright of eye, clear of skin, and confident of beard. 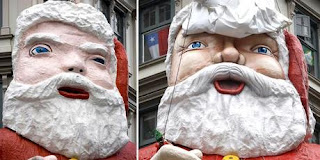