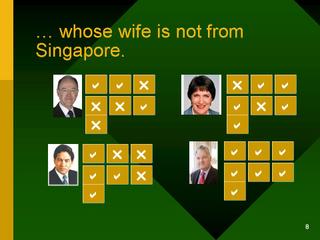 Via Frogblog, via Hard News, the powerpoint presentation everyone's been talking about. 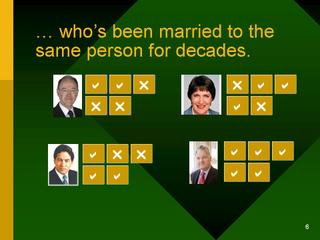 And hey, Helen Clark *has* been married to the same person for decades. Pete the Moral Crusader can't even get that right.


Comments:
I'm fucking livid about this, and I'd be more so if I was married to an Asian

Are Dunne and his fellow bigots implying Asians are substandard humans?

Or that being married to an Asian makes you unfit to govern New Zealand?

I guess I have Dunne to thank for giving me the will to blog again. I guess we can add stupid racist remarks to the long list of reasons not to vote for the utter wankers at UF. I couldn't give a flying fuck who (if anyone) Don Brash or any other leader is married to - man, woman or martian. By their policies they shall be judged.

nzer should apply for some sort of public relations role with UF, what with the tortured sentences and complete lack of logic.

If being married to an Asian is now an acceptable attack point in politics in NZ, we are fucking doomed.

Some Winners do Drugs
Who will they turn to?
My Two Cents
Nandor's Bill
Wrap This!
NRL Round 19
New hit counter
Getting the Bash
Looking Into My Crystal Rugby Balls
But Nothing Comes Out; Just a Bunch of Gibberish