The end is nigh, with Darth George

Russell Brown has recently observed the "petty", "spiteful" and (increasingly) "unreadable" quality of the NZ Herald opinions. He didn't specifically comment on the latest effort from our friend Darth, though. Darth's New Year's message rails against ... (drum roll please) ... political correctness! It is hard to believe anyone is willing to pay this chump to roll out crusade against "political correctness", in an outdated 2005 Wayne Mappesque fashion. This is all very familiar territory.

Our friend Darth doesn't pass on any particular warm wishes for the festive season or the New Year, but blathers on about this amorphous thing which supposedly "robs us of our uniqueness as human beings, while it tries to reduce us all to an amorphous mass of uncertain, anxious, obedient wimps." Darth declines to give any specific example of political correctness, apparently preferring to talk in generalizations about its alleged effects on language (unwillingness to "call a spade a spade") and denial of natural differences between human beings (e.g., claims that "all men and women (and even children) are not just equal but the same.")

I'm not being overly harsh in my interpretation. But I don't see much evidence of the first problem, and suggest the second is in fact, wrong by about 180 deg. One thing I absolutely loathe is a tendency amongst many far left/ultra-critical commentators not to deny the differences between people (on the basis of ethnicity, gender, age, etc) but to grossly exaggerate them, in order to advance a political case that, say, the interests of Maori are radically, perhaps diametrically, opposed to the interests of other New Zealand citizens. Or that women are universally and constantly oppressed by men, etc (hence the need for their own subway cars, perhaps). Such thinking is a recipe for separatism of various sorts, and is far more alarming than any supposed trend towards saying that everyone is "the same" (whatever that might mean). In fact, I think we could do with more emphasis on our common, shared interests as human beings, than on ethnic or gender differences.

What made Darth's alarmist nonsense about tortured, obscure language and the (probably non-existent) trend towards sameness somewhat amusing was the google ad pop-up which accompanied his column at the time I first read it.
1. George W. Bush WWIII
2. Iran Nuclear War Prophesy
3. Your name and Bible codes

Between political correctness, George W. Bush and "Bible codes" the end is surely nigh.


I had the good sense to create a screen capture. 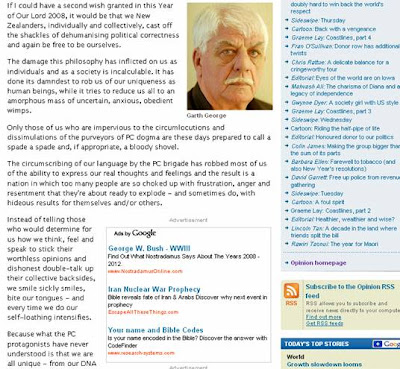 
Comments:
Not being from New Zealand, my only familiarity with Garth George is through your blog. So I can't really judge him generally, but yeah, this latest rant of his seems not only petty and outdated, but is also vague enough to border on meaningless.

If I try to give George the benefit of the doubt, though, I can maybe see the point he might be trying to make. Unlike George, I'll try to illustrate with an example.

My mother once worked for an organization whose goal was to help people with a history of being treated for mental illness -- e.g. helping them get re-integrated into the work force and such. This organization needed to choose a name, and you'd think they'd want a name describing what the organization is for and who they're trying to help.

Understandably, they didn't use the term "mental patients" in their name -- many would agree that that sounds a tad harsh. One would think, though, that they could settle on something like "psychiatric patients" or "persons with mental illness" or "persons who have received psychiatric care" or words to that effect.

What did they end up calling their organization? The "Association for Consumer Empowerment". You see, those who receive mental health care are the "consumers" and the health care practitioners are the "providers". Now I appreciate that some folks might not like wearing the "mental illness" label, and also that people can be misdiagnosed. But this is carrying euphemism so far that it's difficult to tell what the organization even does!

In fact, the name really did trick some people, who assumed from the organization's name that they were something in the spirit of the Better Business Bureau, where you would complain if you bought a vacuum cleaner that the salesman in the store misrepresented.

So I suppose there are some instances where a desire to be euphemistic and not to offend, a reluctance to "call a spade a spade" if you will, can impede communication and even get in the way of helping the people you're trying to help.

And to get a little more speculative, maybe this desire to be euphemistic and non-offensive is partly a consequence of a well-meaning but misguided wishful thinking: "People are really all the same, so why must we invoke these unpleasant labels?" The thing is, though, the very reason my mother's organization existed is that people aren't all the same, that people who have been treated for mental illness face a different reality from the rest of us when trying to re-integrate into society and the work force.

Thinking Of ME
Getting Personal
Reality is as Mad as a Hatter
Santa, the War on Terror's Latest Victim
Don't Piss in my glass and tell me it's alcopop
Christmas staple
You couldn't make this stuff up
Racism in NZ? Surely Not
You Want Surreal?
Business as usual?