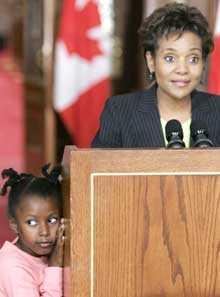 Even the normally sober Russell Brown is agog at the prospect of "total babe" Michaëlle Jean becoming Canada's new Governor General. And hell, that's nothing compared to the Canadian press. Well, she does look a good 15 years younger than her purported 48 years, and she's the real deal as a journalist/commentator. However, among the more interesting observations is this one: Michaëlle Jean replaces Adrienne Clarkson- both female immigrants from ethnic minorities who were award-winning journalists: "The argument can be made that these are superficial similarities. But when you are dealing with a superficial position, that’s all there really is to judge." Touche. Moreover, as the Holden Republic observes: Governors General in New Zealand and, by extension, Canada, are constitutionally useless. It's a bizarre arrangement where the person who hires and (potentially) fires the Governor General - the Prime Minister - can also be hired and fired by her. Moreover, the GG holds reserve powers, some of which - like refusing to assent to a bill - haven't been used in 300 years, and if they were, would result in the GG being dismissed on orders of the Prime Minister. Unless, presumably, the GG dismissed the Prime Minister first. Like, whatever. I'm old enough to choose my own head of state, thanks. The monarchist notion that Governors General protect our liberties by, err, doing absolutely nothing "political" is also patently absurd. Vive le Republic.

Oh yes, and this guy's got balls. He wouldn't last 5 minutes in New Zealand with the likes of Peter "Bigot" Dunne and Jim "Self-Appointed Drugs Tsar" Anderton around. Good luck firing up a joint on the police station steps, let alone encouraging urban agriculture by selling seeds. I hope the Canadian judiciary tells the USDEA to go fuck themselves with an atom bomb.

An excuse to put this picture here
The Price is Wrong
NRL Round 22
Celebrity Scuttlebutt 20: Informed Political Diatr...
Telecom's Reply
Telecom, Words Can't Quite Express the Way I Feel ...
League and rumour
cha-ching
Nonu to switch codes?
NRL Round 21