Wellington Zoo's new dingo pup sure is cute, but its keeper is dumb as a sack of nails to say:

"The dingo is not a domestic dog and no amount of socialising will turn him into one."

First, dingos (like any member of Canis lupus) is domesticatable, especially if raised by humans from puppyhood. Many dingoes are kept as pets today, and others as working dogs. Just like they have been for thousands of years.

Second, the keeper is pictured exhibited exactly how you socialize a dingo puppy to make it a domestic dog. Some breeds require more effort than others in this regard (think: wolf, rottweiller, etc.), but dingoes will bond very strongly with humans if given the opportunity. 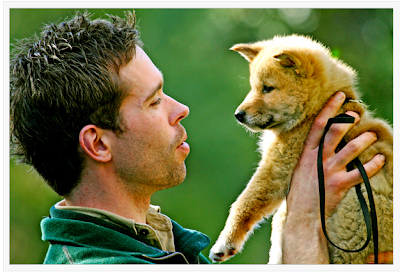 The NZH continues to offer "analysis lite" on this issue, which is actually critically important to every New Zealander's standard of living. Further importance stems from the forthcoming GST rise, about which New Zealanders seem entirely nonchalant - unlike Canadians, who tend to go apoplectic at any increase in consumption taxes.

The Auckland cafe-proprietor quoted in the NZH article claims "Milk had gone up 50 per cent, labour costs had also increased and the price of coffee beans had reached a 12-year high on the New York Futures Exchange."

Two days ago I bought 4L of milk at Safeway here in Canada for $3.99 (and it's GST exempt). That's the same price I paid six years ago. Petrol ("gas") is $0.85/L (again, much the same as it was six years ago). And I can buy a kilogram of acceptable coffee beans for $11 (although higher quality, or fair trade, beans are considerably more expensive).

Bananas to replace opium poppies as Afghanistan's most valuable crop. Soldiers everywhere will fear the monkeys' large canines, lack of social conscience, and deadly aim. Some will, as a result, pull carefully-folded US flags from their pockets.

New Zealanders in the NRL 2010

In what is starting to become a bit of an annual post here's the NZers in the NRL that I know of. Qualification is that they were born in NZ, have played in NZ or are eligible. There's the odd exception but it's about right.