"It is very, very hard when you are a minister to maintain a relationship," he said.

I'm sure it is, but I expect some will ask whether taxpayers should be picking up the tab for such "maintenance" - aka sightseeing and a bit of what-have-you with the missus in a five-star hotel room. 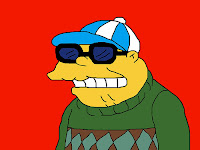 Perhaps Mr Hide will be subject to less scrutiny in this regard than Mr Carter, because his partner is (a) a woman and (b) relatively hot.

Moleman could only dream of such things.

Labels: not so much busting perks as enjoying them, rodders

Comments:
Loving this. Rodney dishing out hypocrisy not with a shovel, but with a pick-up truck.

Anyway, I thought business class was only for tall people.

She's probably quite tall, Leggie. And Rodders could hardly sit back in coach while she enjoyed business, eh?

Well I know he’s very proud of her. That’s why he’s lost all those spare tyres and whored himself all over New Idea etc.

Do you think they joined the Mile High club while up the front of the plane?

Not a good time for the Minister, or is that the MP? Or is that Minister on his ticket and MP on his companion's ticket?

I am not offended by perking in general, nor by Hide's desire to travel to Europe with his partner specifically. What blows my mutherfucking fuse is the hypocrisy of how he did it.

In another pandering bid to prove how well-connected he was to the electorate, the Prime Minister had instructed his Ministers that they should meet the travel costs of their spouses personally if the spouses were accompanying Ministers on overseas trips.
Hide understood Jonkey's edict very well and so, with his Minister's hat on, he obediently met the costs of only his travel from the taxpayer, under the Ministerial Services budget. But he then, and this is the gobsmacking bit, whipped off his Minister's hat, put on his Member of Parliament hat (under which his partner qualified to travel with him) and ran next door to stick out his hand. So her trip ended up being paid for by the taxpayer from the Parliamentary Services budget.

What a cheeky little cock eh! But then, Hide did check with the PMs office, and they did okay his actions. The PM is reported to be, as ever, "relaxed about it".

Poor relaxed Jonkey! The PM apparently doesn't realise that under the Westminster system, only MPs can hold Ministerial warrant. So what possible good is his populist edict about spouses' travel if he allows Ministers to swap hats and have spouses travel with them, because they're MPs as well as Ministers?

I think the bigger hypocrite is Jonkey.

I appreciate your analysis, Chuck Z.

If Jonkey was any more relaxed, he'd be paralytic. But the New Zealand public currently seems to prefer relaxed/paralytic to energetic/serious (qualities possessed by both Clark and Goff).

But then I guess Johnkey is a retiree (from the world of currency speculation), so relaxation goes with the territory.

So Hide and mummy’s boy Hone in further shit this morning.

Say all you like about the major parties, it’s the coalition partners that have caused 95% of the problems over the last 2 governments.

It's almost too good to be true, although as a "white motherf**ker" I should probably take offence. I guess such trash-talking goes down a treat with a proportion of Hone's electorate, though.

Good call DC. Hone isn't out of step with his constituency - he represents the extremer end of Maori politics and they'll see it as he called it. The Member for Epsom, on the other hand, has let down his constituency.
I'm amazed that Jonkey's is still relaxed about Hide fundraising on the back of his ministerial office after spending public funds on personal travel and mouthing off that Key does nothing. But as soon as Hone reacts angrily to an email from an acquaintance, and uses the same racist term that the acquantance had used, well oh heck does that get Jonkey mad! He's all steamed up and telling the Maori party to rein him in at once.

NZ Police ban league, soccer, boxing, tae kwon do,...
Come And Get Us, McCain!
M.I.A. - Bucky Done Gun
Smoke if ya got em'.
$45 well wasted
Lessons Learned
Saturation coverage
You're a fucking cock, is what you are
Dubious headline award
On being a complete and utter fuckwit