She’ll chew you up, spit you out and likely fuck Reggie while Jughead films it.

Yeah, it looks like Archie is going to propose to Veronica this summer.

This has trouble written all over it.  He’ll chase her every need, become more jaded with every condescending request from the in-laws, always be made to feel less worthy, and he’ll be reminded, time and time again, that he doesn’t come from old money.

When his mates want to go for a beer, he’ll likely say ‘no.’  Not because he doesn’t want to, but because there is likely a busy Saturday of Bed Bath & Beyond that the Mrs. lined up for him.  That, or a baby shower that she’s suckered him into attending.  The truth is, he wouldn’t be able to raise his pathetic head to look at his buddies square in the eye over a beer anyway.  He’ll barely be able to live with himself.

But imagine a life with Betty?  Ahh, I can just see the relaxed canoe trips on the lake together.  She’d probably all ready prepared sandwiches, spiked the lemonade with a bit of vodka, and all she’d want in return?  A little kink on the lake.  It’s actually a blast to do it in a canoe.

Veronica would be at the front of the canoe, likely reading a glamour mag, and I’m sure as Archie is reaching over to grab the cell phone to make lunch reservations, the thought of whacking her insurance-policy-loaded head with a canoe paddle would be fiercely tempting for him.

There’s no doubt how this is going to end.  Archie will change, feeling the weight of the world crush him into frequent bouts of closet binge drinking.  Veronica will really have no idea why Archie can’t get it up after a year in to it, and thinking only for herself, she’ll likely feed the baby clock with Reggie on weekends.

And as for heart-broken Betty?  She’ll try to pick herself up with a series of blokes all progressively worse than the one before.  It will start with the down on his luck toser, who just got laid off from the paper mill and whose grade 12 education can’t open a single door in Riverdale.  She’ll figure “ahh, at least he’ll never leave me.” 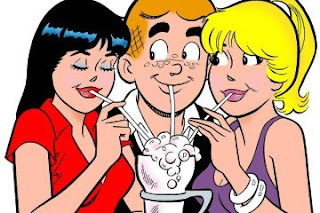 But then she leaves him and goes for the large-type asshole who takes a shit with his blackberry in hand.  Once he leaves her, she’ll meet a collection of one-time flings at the bar, and a series of poorly planned internet dates, until she wakes up in her early thirties to realize, “my gawd, I’m a whore.”

You see, Archie.  You have a lot more than your immediate interests at stake here, you self-centred fuck.  Think about the big picture and save you and Betty from the nasty fates that lie ahead.

No.  Moths are always attracted to fateful flames.

Predictable?
NRL - taste buds weekend
The issue that wouldn't die
Whatever happened to...
NRL Round 11
Accuracy in reporting
The What's So Super 15
Panda Diplomacy
NRL round 10
Real Men