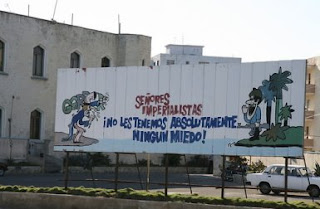 Happy Birthday to the Cuban Revolution.
Congratulations on Fifty Years of stable government, and outlasting 10 U.S. Presidents who tried to topple it all.
Good luck on the next 50!
¡Viva la revolucion!
¡Hasta la victoria siempre! 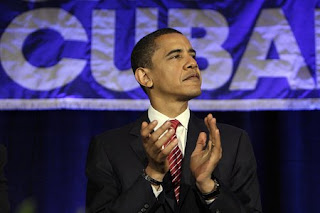 Comments:
It must grate living in a democracy, maybe you were taking to heart an excess of left pinko music by rich rock stars who think its 'cool' to be revolutionary, yet will probably shoot anyone who asks them for money.

Which left wing cause did your last pay contribute towards ?

It's always so nice to receive well thought out comments. Too bad that's not the case here.

How's the weather in Miami, Anonymous?

A well thought out answer to a basic question. Left Pinkos dont need to answer questions, they just go on about the glory of some mystical revolution.

Obama will bring the Castro regime down.

Bring down the "Castro Regime"? With what? Strong language?

If anything, an Obama Whitehouse will likely try to reverse the senseless trade embargo and restrictions for U.S. citizens to travel to Cuba.

And what's this "Castro regime?" Fidel hasn't governed that country in a couple of years now.

And as for avoiding questions...what's your question then, guy? About contributing my pay?

Well, I guess that I would actually need to receive a salary first, before I could contribute anything.

No, no, I manage to get by on pure idealism, compassion for the downtrodden and the glory of mystical revolutions....you nosy shit.