Don't let the door hit your arse on the way out 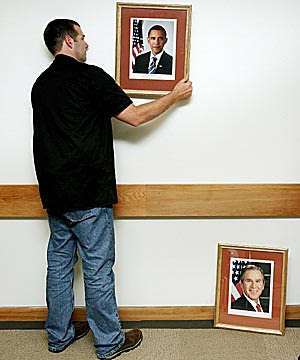 So long, Dubya. You've been a complete and utter fuckwit. As NRT suggests, even if Obama "is only as bad as Clinton, he'll still be a vast improvement on the Bush Administration." Clinton was frequently a jackass - who victimized the poor in his own country, and instigated various atrocities abroad - but is made to look really bloody good by virtue of being bookended by the mediocre George H. W. Bush, and his atrocious son.

When he got out of the media, Wolf Blitzer and the other "True Voices of America" said, "he's very brave, very very brave, because the secret service can't protect him in these situations."

These people don't fucking get it. The entire planet is enjoying a moment of unity around this guy. The real security threat was in 2000 when angry crowds damn near prevented W. from getting to work.

I was kind of hoping someone would have a shot at him.

And get Bono instead.

Where's the video?
This is what sport is all about
"I'll wallpaper, you take a rest"
Cross-subsidization
NFL
Alas, poor Skippy
bullshit and poppycock
Sonny Fai
Feliz Cumpleaños a Cuba
Say their names with reverance and pride