Get out of my country, McCain! 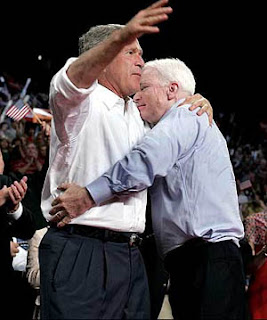 John, “I called my wife a cunt” McCain came to Canada today. And the feel in the media is that it is so touching for a U.S. Presidential candidate to come to the country. The Prime Minister hasn’t made much of an effort to meet and greet McCain and it has cost him a bit in the newspapers.

McCain’s creepy presence here is shrouded in a language aimed at reminding the country that we’re not the 51st state (That’s Puerto Rico, apparently). He said, “What a blessing it is for the United States to have in Canada a neighbour we fear only on ice rinks and baseball diamonds.”

Good to know that McCain is a good 12 – 15 years out of date on his sports knowledge, (the Stanley Cup and World Series have not been here for while) but that’s fine.

The real reason why Senator Sleepypants is here is because Canada is the largest supplier of oil to the United States, and there is a big patch of tar-sand oil that if developed further could reduce the fuel costs in this continent. The tar sands aren’t located in the mouth of Al Qaeda territory, no, the only thing holding back unbridled development of “the patch” are trees, bears, cougars, and First Nation’s Peoples. So it would take far fewer soldiers to take control of this patch and develop it to high hell.

But there is something else that holds back the oil sands. That is the simple fact that it is not in the least bit profitable.

It has yet to turn a profit, because the extraction process of removing the oil from the sand is more costly than the refined product at the end of it all. Long story short: 1 barrel of water and 1 barrel of processed gasoline to get 1 barrel of sludgy bilge oil out of the sands.

But this is where financial speculators come in. These assholes can calculate equations and numbers and graphs and shit that will show “short-term profitability” and “long-term potential revenues” to come out of just about any development project from the tar sands to turning lead to gold. It takes about 1 or 2 Presidential terms to prove them wrong, and by that time the money is spent and gone and the next smart-mouthed-stupid-ass Republican is up for office.

McCain is here to bolster confidence in the oil sands development and to talk up energy security with Canada. That’s it and that’s all. The benefits of this plan are about zero. Environmental destruction, massive carbon outputs, speculated capital, and the almost-certain guarantee of a recession forthcoming that will ruin livelihoods.

Can we please kick this fucker out the door?

A Hungry World and a Skinny Fidel
What the fuck is the National Herald playing at?
Define irony
Bank scum
Gods of Nature: 1. U.S. Military: 0.
No Ali
NRL Round 15? picks
The Difference Between a Korean and a New Zealander
Watch South Park tonight!
Baying for blackouts